When building a ReactJS app, you can take advantage of isolated UI components to speed up your build. This idea is not something new – it's actually a React philosophy. Using UI component libraries helps you accelerate development time while using best practices followed by various developers all over the world.

When creating a React app, deciding to use a specific component library could be a difficult decision to make since there are many options available.

In this post, we are going to list some of the best component libraries available to use in your React applications. The libraries mentioned in this post are open-source.

If you are looking to develop your skills or learn React, check our variety of posts on ReactJS applications here.

Material design was introduced by Google around 2014 as a design language, and it still shares some popularity among web and mobile applications. One of the common ways to integrate and use this design system in React apps is through the Material UI library.

It is one of the most popular component UI libraries in the React world. It offers built-in methods such as makeStyles to style and customizes components that are available with this library. The documentation is clear and beginner-friendly, and the components often have reference to specific Material design systems they are based on. The merit of using this library comes with its popularity and having a small bundle size. You can create your own customizable themes and color palettes and share them globally to use across the entire React app.

Ant Design library enables you to build React Native apps quickly and has a large set of React UI components. It's a library written entirely in TypeScript with support for internationalization for over 12 languages. The documentation is comprehensive, and the set of components are well named.

All modern browsers are supported by this library, such as Chrome, Safari, Internet Explorer, Edge, and so on. Other than supporting web browsers, the components from this library are also available to use with modern desktop app-building frameworks like Electron. The design system this UI component library is based on is well-thought-out, and there are over 50 customizable components.

If you are looking forward to developing a mobile application along with a web app, Ant Design offers a separate mobile UI component library for cross-platform applications that are developed using React Native. The advantage here is that both of these UI component libraries follow the same design system, which comes with its own set of icons and charts.

Another advantage of using this library is that each component is implemented with accessibility in mind. The result is a set of accessible-by-default components, over what is possible from plain Bootstrap.

Using the Semantic UI library to create React components is quite similar to using the React Bootstrap library. This library is also the official integration of the Semantic way of writing React components. It has a declarative API which gives the advantage of providing robust features and props validation. Method and events that used jQuery in the implementation of Semantic CSS are now done imperatively by directly manipulating the DOM.

Semantic UI React does not have its own styling system and fully relies on the theming of Semantic UI. It's really powerful; you don't need to know LESS or CSS, and you can simply update values of variables or use styles from predefined themes. In the official documentation, you will find some layout examples that are built well enough to teach you how can use and customize Semantic UI components to create React apps.

Reactstrap is a user interface component library that is similar to Bootstrap but only provides components for React applications. Using it requires you to install the bootstrap library package and import the bootstrap CSS file.

The syntax of the components using this library is similar to the React Bootstrap library, but the advantage of using Reactstrap is that it supports camelCase component names in accordance with the conventions followed in the React community.

One advantage that Reactstrap provides (that most UI libraries mentioned in this post don't) is that if you prefer to include Reactstrap globally by marking reactstrap as external in your application, the reactstrap library provides various single-file distributions, which are hosted on the CDNs.

With 9k+ stars on GitHub, this library is popular among React developers.

Evergreen is a React UI Framework that contains out-of-the-box reusable components. It uses CSS-in-JS and has support for theming React apps. It provides components to create primitive layouts along with several utility components that support inline styling.

The objective of this library is to provide a consistent development experience and customization options that are well-suited for enterprise-level applications. The documentation provides a detailed explanation of the design system this UI library is based on.

This UI library is designed with a mobile-first approach in mind. The approach it takes has a consistent user interface across the different mobile web applications. It consists of a set of components that can be imported from the react-onsenui library and can further be customized using style attributes. These customizable components are based on flat and Material design.

Another advantage this UI library provides is that it has support not only for React apps but Angular and Vue as well. The library creators have also provided a playground for you to try it out, and have a careful look at its components' look and feel. With GitHub stars around 8k, this component library has come quite far.

Rebass is a mobile-first, minimal collection of responsively styled components that are built to be used in React applications. This library has support for creating theme-able UI elements and is based on the styled-system library.

By default, Rebass components are stylistically unopinionated and do not include a theme. You can add a theme to your application with a ThemeProvider component and by providing a theme in context. This gives you complete control of using and customizing a theme for your React app.

Chakra UI is a simple, modular, and accessible component library that gives you all the building blocks you need to build React applications. This UI library provides an easier approach to creating custom themes. It uses reference values from your theme throughout the entire React application on any component.

It contains a set of layout components like Box and Stack that make it easy to style your components by passing props. The components provided by this library are built on top of a React UI Primitive for endless composability. These components follow the WAI-ARIA guidelines and have the right aria-* attributes.

The libraries in this list have been included based on personal experience and level of active maintenance. These component libraries will help you develop faster and without reinventing the wheel every time you create a new React app. 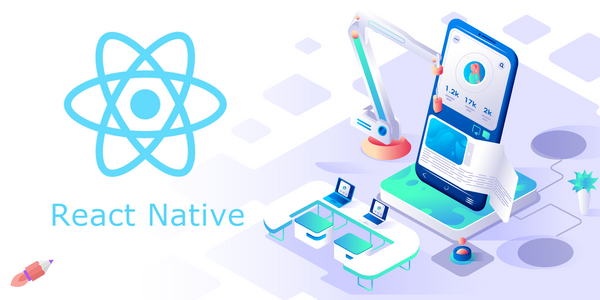 This list of the best SQL, NoSQL, and document-based databases will help you choose the perfect database for your next React Native app.

Originally announced in 2018, the React Native re-architecture is an ongoing effort by Facebook to make the platform more robust and address common issues.